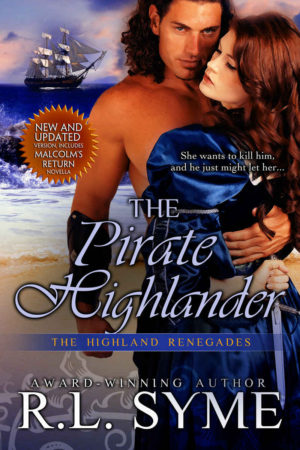 Malcolm Sinclair left home a haunted man, looking for redemption, for a new life. When he finds acceptance with a band of Dutch privateers, he leaves Scotland for good, never to look back. Until his Captain’s daughter is kidnapped by Scottish brigands and he must save her. But his responsibility to this captured woman goes far beyond that of a rescuer, for he has promised to protect her with his name, with his heart, with his life.

Lilian Mason wants only one thing. Revenge. She sneaks aboard the Dutch pirate ship, captained by her mortal enemy, her knife and courage at the ready. But when she is unwrapped by a bewitching Highlander instead of a giant blond pirate, Lilian fears her plan has gone very wrong. If she waits to exact her revenge, she risks being discovered for the fraud she is, but even more dangerous, she risks losing her heart to the man closest to her enemy… an unexpected Pirate Highlander.

When mistaken identity leaves her captive, he has no choice but to return for her…

Malcolm Sinclair returns home to find Kees Rademacher and his pirate friends waiting for him. Malcolm’s plans to free Josephine de Witt from her enemy captors can only go as far as Kees will allow. Kees would like nothing more than to grab the girl and be done with it. Until he lays eyes on her.

Josephine de Witt is an unexpected complication. She is beautiful and willful and has plans of her own. And while Malcolm would love nothing more than to return to his wife and family, Kees only has eyes for Josephine. But when her pirate captors discover who they have snared, no one is getting out alive.