Saturday was my very first book-signing event. We’d held a release party at my house in January, so I had a little experience having to talk about my book, but it was in the comfort of my own home, and not really open to the public.

The Country Bookshelf, where the event was held, is a local bookstore, owned by a local book lover, and famous for being sort of a Shop-Around-the-Corner place, holding out against the massive discount stores and online sales. It smells like history and hope. A two-story rectangle with nooks and corners, it is the public equivalent of your favorite reading chair. I love it there. I wrote about it in my book.

In the reading, I read the section about the Country Bookshelf, where my hero (who enters in a wheelchair) comes to find a book called “Poop in the Park” as a gift. This is also a real book. The section I read is full of real places. The Bozeman Angler, Vargo’s, Tracy Avenue, Sweet Pea, Lindley Park. Everything about the book tries to employ not only the “real” Montana, but the “real” life of people who have been hurt by religion.

Sean has not only a difficult past with his father (a highly religious, highly abusive man), but had a catastrophic accident he feels was such a fluke, it had to be a punishment from God. It was interesting to discuss this with the crowd, because of course, it’s been almost four years since I conceived of this book.

But perhaps the most interesting part was to discuss the book with people I hadn’t met, or to overhear the discussions of the book by people who happened to be in the bookstore while we were having the signing. I learned a few things about the book from this experience.

1. It seems like a book club book. Several of the people who came because of either the Country Bookshelf announcement or the information in the paper were there on behalf of book clubs.

2. The most likely demographic to pick up the book based on its cover are men. (This surprised me the most.) Additionally, when they talk about the book with people who have read it (mostly the staff were those I overheard), the fact that it’s got “real Bozeman” stuff in it was a big seller. Both of the people who picked it up after having spoken to a staff person seemed to show interest about it being a “Bozeman” novel.

3. Men don’t balk at it being called a “romance novel” because, according to them, the cover doesn’t make it look like a romance novel. That part interested me the most, especially because our title quest went on for so long because we couldn’t all agree on a title that felt enough like a romance novel until “His Wounded Heart.” But the title doesn’t appear to throw them off.

4. After speaking to a few men who have read the book, they didn’t feel like it was a “chick” book. One of the women who read it called it “gender neutral” as we discussed the focus of the book. 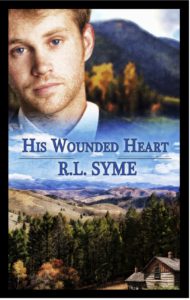 All in all, it was a great experience. It was great to see everyone, and my sister surprised me by flying in from San Diego, which was fantastic. I look forward to hearing more about how others handled their first book signings.

What about you? Have you been to a book signing? Or hosted one of your own? What was it like for you? What did you enjoy and not enjoy? What stood out to you? Did you enjoy the author and his/her presentation?