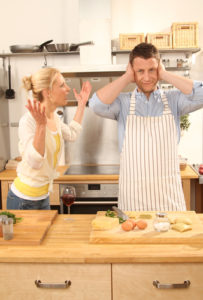 Of course, that’s the most difficult thing a girl can be faced with. Every potential boyfriend represents life. And no matter how much you love someone (or how attracted you are to someone), the decision between two people is much more complex than which is more attractive, or which kisses better.

The trend seems to be having to choose between two extremes of present-life and future-life. You’ll have the darker, more damaged guy. He often provides a little more extreme chemistry (I like to think of it as flash in the pan). Then, there’s the nice guy. His chemistry will be slightly less flashy, but he brings the promise of more confidence in his fidelity. Less fear about his ability to commit. But fear breeds adrenaline. So heroines who like the rush will end up with the bad boy. And heroines who prefer consistency and stability will choose the good guy. And there really are all different options.

As a reader, we always have our opinions. Personally, I almost always want the heroine to pick the good guy. I know that she might like the push-pull of the bad boy, but when it comes down to it, you’re choosing your potential mate in a romance novel. We expect that, even if you don’t get married at the end, you might get married in the near future. That’s a big decision. So the way the heroine makes this decision tells me a lot about her.

I’m still not sure how I feel about the trend, as a general rule. I do enjoy them once in awhile, but you can only take so much indecision. I like knowing who she’s going to end up with. Uncertainty makes me nervous.

What about you? Do you like two heroes? Do you tend to prefer the bad boy or the good guy? Is there a third kind of hero that you’ve seen?